The Buddha’s life of enlightened activity was and continues to be a shining example of life’s ultimate fulfilment. He shows us that it is possible to realise our full potential by overcoming ignorance and afflictions to awaken wisdom and compassion in the light of understanding how things truly are. Having awakened himself, the Buddha spent the rest of his life enabling and helping others along the path of awakening.

These four special Wheel Days mark four main events of the Buddha’s enlightened activity that are celebrated in Buddhist communities around the world. Here we follow the Kagyu Lineage of Buddhism which uses the Tibetan lunar calendar, therefore the dates of the Wheel Days will be given starting from the first month of the Tibetan New Year, which generally corresponds to February.

CHOTRUL DUCHEN – The month of miracles starts with the first fifteen days of the Tibetan New Year, culminating in the Wheel Day of Chotrul Dechen celebrated on the 15th day of Full Moon. It commemorates the fifteen days of miracles displayed by the Buddha in the Jetavana Grove of the ancient capital Kosala, which is now one of the holy places of pilgrimage for devout Buddhists.

The Buddha’s miraculous powers were based on his enlightened View:

By these means the Buddha not only overcame the mistaken views of extremists and nihilists, who became his disciples, but also increased their merit and devotion.

SAGA DAWA DUCHEN – Celebrating the Birth, Enlightenment and PariNirvana of the Buddha on the Full Moon of the 15th day of the 4th Tibetan month, usually corresponding to mid May in our calendar.

The Buddha was born as a prince of the royal Shakya clan in Lumbini, in modern day Nepal. As a young man he became disillusioned with his life of luxury and gave everything up, leaving the palace and his family to search for wisdom and truth. After several years he reached complete enlightenment under the bodhi tree in Bodhgaya in India. And, after a life of teaching the Dharma, he passed away from this earth while in Kushinagara, and beyond suffering, known as PariNirvana. Therefore it is the holiest of months and all the places associated with these events have become sacred sites of pilgrimage for Buddhists around the world.

CHOKOR DUCHEN – This day marks the First Turning of the Wheel of Dharma. It is celebrated on the 4th day of the sixth Tibetan month, in late July or early August. It commemorates the very first teaching the Buddha gave, after his enlightenment in Bodhgaya, when he journeyed to the Deer Park in Sarnath, near Varanasi. There he met the five ascetics he had previously meditated with and to whom he imparted
the teachings on The Four Noble Truths.

This first turning of the Wheel of Dharma set in motion all subsequent turnings of the Wheel that comprise the Buddha’s teachings, that constitute the Vinaya, relating to conduct and discipline, the Sutra and Tantra of meditation, and skilful means, and the Abhidharma of knowledge and logic. With supreme wisdom and compassion, the Buddha taught all types of beings in ways best suited to benefit them.

LHABAP DUCHEN – Celebrating the Buddha’s Descent from the Heavenly Realm after liberating his mother. This Wheel Day is observed on the 22nd day of the 9th Tibetan month, which corresponds to mid November, i.e. this Tuesday the 15th.

Soon after giving birth to the son that was to become the Buddha, his mother, Queen Mahadevi passed away and was reborn in Indra’s heavenly realm of Sukhawati. To repay her great kindness after he became enlightened, the Buddha manifested in the god realm where he spent three months teaching the Dharma and his mother was thus liberated. When the Buddha prepared to leave the heavenly realm the gods
Indra and Brahma manifested three stairways leading from heaven and accompanied the Buddha with great honour as he descended back to earth, alighting in Sankisar, now a holy place in Uttar Pradesh.

All Four Wheel Days are major Buddhist festivals or anniversaries celebrated in various ways, according to the cultures and traditions of different countries. But the main point is to honour and emulate the Buddha by applying his teachings. It is especially important to remember that on Wheel Days the effects of our actions, whether positive or negative, are multiplied 10 million times! Therefore we should be mindful to refrain from harmful actions and practice virtuous ones. 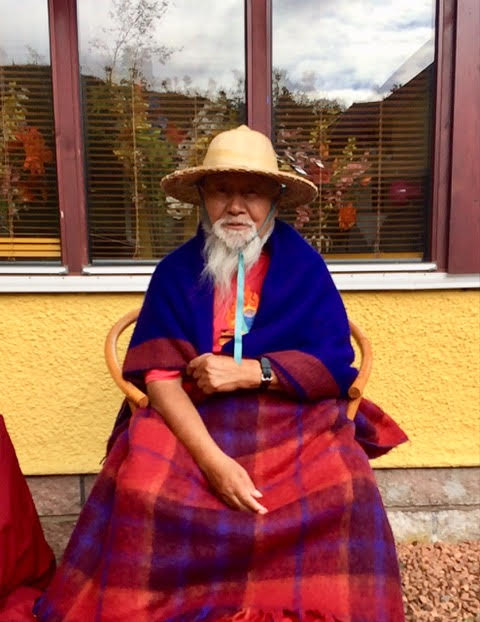