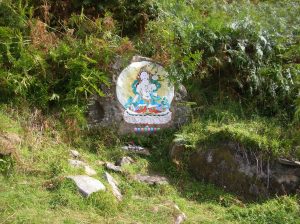 Explore the fascinating story of how Tibetan Buddhism came to the West, and in particular to Holy Isle, a magical island off the West Coast of Scotland.

Ani Rinchen Khandro, a nun in the Tibetan Buddhist tradition, was ordained and studied at Kagyu Samye Ling Monastery, then completed a three and a half year retreat on Holy Isle, before being appointed to establish and run Kagyu Samye Dzong Edinburgh.

She returns to the island this summer to share something of its unique history and revitalising energy, giving talks, guided meditations and pilgrimages to the cave of Celtic Christian Saint Molaise and to the Tibetan Buddhist Masters depicted in beautiful rock carvings, allowing the island to speak for itself.

Information and Bookings at www.holyisle.org